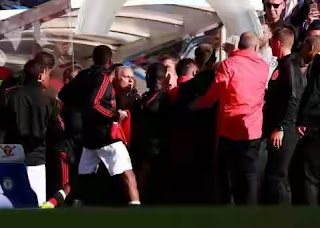 Manchester United boss, Jose Mourinho, has escaped a touchline ban after being issued with a warning by the Football Association, following his tussle with Chelsea Assistant Coach, Marco Ianni.

However, Ianni has been charged with improper conduct.

”It is alleged that his behavior in 96th minute constituted improper conduct. He has until 6pm on Thursday 25, October 2018 to respond to the charge.

”In relation to this incident, Jose Mourinho has been formally reminded of his responsibility whilst both club have received similar official reminder in terms of the behaviour expected of their staff and players at all times whilst in the technical area” an FA statement read.

Russia has changed the rules for small airports

Kremlin talks about restrictions at Putin’s press conference over COVID