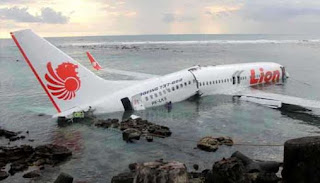 A passenger plane carrying 188 people has crashed into the sea off Jakarta.

Flight JT610 lost contact with the ground 13 minutes after take-off, The Guardian report.

”It has been confirmed that it has crashed”, Yusuf Latif, a spokesman for the country’s search and rescue agency said on Monday.

A search and rescue effort has been launched for the plane, which departed Jarkata about 6.20am Ipcal time on Monday.

It was scheduled to land at Pangkal Pinang atb7.20am.

Wreckage has been found near where the plane lost contact with air traffic officials on the ground. Said Mohmmad Syaugi, the head of the search and rescue agency.