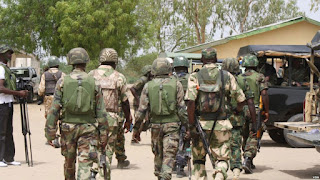 There is a panic in Ogutun-Ekiti, a community in Ekiti southwest LGA of Ekiti State over the killing of a soldier by unknown gunmen.
Resident claimed that the soldiers now patrol their community in twelve Toyota Hilux vans.
While many resident have left the town, others who are afraid of going out are currently indoors.
A community leeder, Mr Paul Awopetu, who confirmed the development to reporter on Thursday, said a resident was killed by suspected robbers at Olori farmstead in Ogutun.
Awopetu disclosed that one person who escaped from the robbery scene reported the incident to soldiers manning a checkpoint between Ogutun and neighbouring community.

Biden postponed the US shutdown