Hundreds of Tajik citizens came to the Tajik Embassy in Moscow yesterday. The reason was the events in the Tajik Khorog, the main city of Gorno-Badakhshan, where a local resident was killed. We found out what happened to the Tajiks so much. 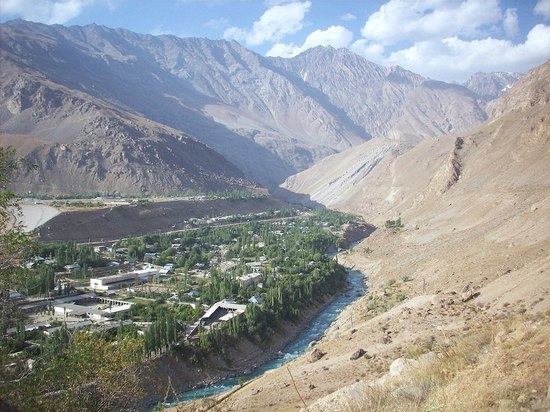 In the city of Khorog, for the second day, mass protests over the murder of a local resident did not subside. Different versions circulate on this score. “Narodnaya”: a man allegedly stood up for his sister, who was harassed by the assistant prosecutor of one of the districts of Gorno-Badakhshan. The troops cordoned off the mountains around the city and turned off the Internet, and inside Khorog people are cutting down trees to block the road for vehicles. The protesters have already injured 5 police officers. According to local media reports, 6 people were injured among the protesters, two were killed. At the same time, people begin to move to political demands.

A mass protest action began in the center of Khorog on November 25 with several dozen people, but, according to local residents, people continue to flock there not only from all over the city, but also from surrounding villages. People spent the night right on the street, for this they made a fire in the square.

The killed – a resident of the Roshtkala region of Gorno-Badakhshan Gulbiddin Ziyobekov. The police accused him of kidnapping the assistant prosecutor. Ziyobekov was wanted on suspicion of taking hostage by an organized group and inciting ethnic, racial or religious hatred.

On the morning of November 25, security officials came to Ziyobekov's home and tried to detain him. The police used a service weapon, as a result of which the attacker and two of his friends were wounded, one of whom was also a policeman and told his colleagues that their actions were illegal. According to eyewitnesses, Ziyobekov was taken out of the house alive, put in a police car, and after a while they reported his death.

Eyewitnesses say that in the afternoon of November 25, the protesters brought the body of Ziyobekov to the central square of Khorog.

The protesters claim that the murdered person became a defendant in a criminal case due to an incident that took place in February 2020. Then Ziyobekov, together with his family and friends, kidnapped the assistant prosecutor Abdusalom Abirzoda and kept him for 8 hours, periodically beating him and demanding an apology for harassing his sister. There is even a video in which Abirzoda, surrounded by a crowd of men, asks for forgiveness from all residents of the autonomous region for his behavior.

The head of Gorno-Badakhshan, Alisher Mirzonabot, promised the protesters in the next 2-3 months to sort out the unfolding tragedy and punish those responsible. This is not only about the killed Ziyobekov, but also about those who were killed and wounded during the protests. However, people believe that this is not enough. First, they already know who committed the crime and when, so the investigation must be completed 10 days in advance. Secondly, they put forward political demands.

First of all, they want 70% of the military in Khorog to be formed from local residents. At the same time, the Interdepartmental Headquarters for Ensuring Order and Law should be disbanded. The roadblocks in Khorog must be removed, the Internet must be restored, and the head of the autonomous region must be fired.

Expert on Central Asian countries Arkady Dubnov told MK how serious events are unfolding in Khorog and whether they can develop into something big:

– First of all, I want to emphasize that the events in Khorog have nothing to do with to the threats that official Dushanbe constantly repeats when talking about Afghanistan. Secondly, Gorny Badakhshan is an unremovable thorn in the discourse of Tajik internal politics, its integrity and stability.

The Pamiris, who live in the autonomous region, are really different from the lowland Tajiks. They are Shiites and their spiritual leader is Prince Aga Khan IV. Moreover, all conflicts between the residents of Gorno-Badakhshan and the central government were always resolved through the mediation of the Aga Khan. Their current demands only underline the desire for isolation from Dushanbe.

Usually, incidents that lead to a conflict between the center and the autonomous region occur unexpectedly. They occur due to the fact that Dushanbe seeks to resolve domestic conflicts using tough methods of force.

If the Tajik authorities promptly and respectfully treat the claims of the Pamiris, then the incident will be able to be neutralized and resolved. Otherwise, a full-fledged armed confrontation may begin. Local residents are armed. The situation in Gorno Badakhshan may turn out to be a fuse for the already more than tense situation in Tajikistan.

– Local residents feel like a real autonomous structure within Tajikistan. People do not feel obligated to Dushanbe for anything, and this is precisely their main claim. They themselves want to form local government bodies.

– They believe that this will lead to an increase in the threat of separatism and the concentration of opposition structures in Gorno-Badakhshan.

– Today there is no real danger from the Pamiris resistance to official Dushanbe. During the civil war, the Pamiris, being part of the opposition forces, really posed a threat to the authorities of the republic.