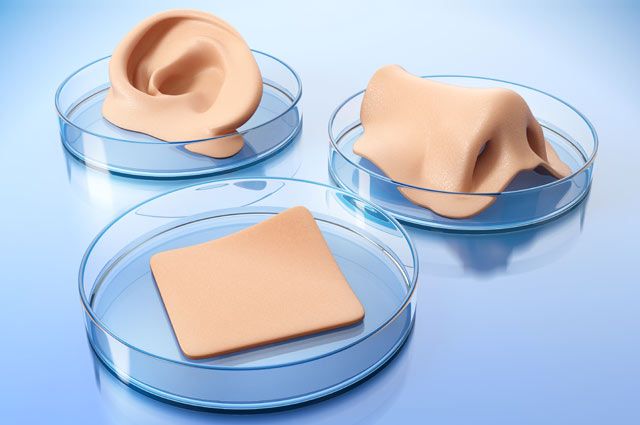 According to the UN, from 15 to 30% of patients die from the fact that they cannot find donor organs. Therefore, scientists are looking for ways to create them artificially. One way — bioprinting on a 3D printer. The technology is complex, with a lot of nuances, but progress is relentless: science is moving medicine forward, taking it to a new level.

Recently, a human ear grown from cells was printed in the USA 20 year old patient. The girl suffered from microtia — a rare congenital disease in which both external ears are underdeveloped or absent altogether.

Scientists from 3DBio Therapeutics first scanned the patient's healthy ear, then took cartilage samples from her and grew as many cells as needed for the second ear. The resulting material was mixed with collagen-based bio-ink, poured into a 3D printer, and an artificial organ was printed.

An implant called AuriNovo is already undergoing clinical trials. The ear printed on the printer is almost impossible to distinguish from the real one. In addition, the implant contributes to the restoration of hearing. The developers expect that their technology will further significantly improve the quality of life of people with microtia. In addition, they hope that it can be used to restore other cartilage parts of the body — for example, noses.

The method of bioprinting in medicine is used more and more often. The first experiments in this area were carried out on conventional household 3D printers, which were modernized in laboratories. It was about twenty years ago, at the very beginning of the XXI century. In 2018, the global market for 3D printing in medicine was estimated at $973 million, by 2025 analysts expect it to grow to $33 billion, and by 2027 — over 40 billion.

A heart for a midget

The pioneer of the industry is the American company Organovo. Its engineers pioneered the technology to print liver tissue. They also printed kidneys that can last up to two weeks. Medicines are tested on these organs. But the 3D printers used by Organovo are already capable of creating tissues for surgery and transplantation.

In Russia, bioengineers from 3D Bioprinting Solutions are involved in printing organs. They developed a device on which they printed and transplanted a thyroid gland into an experimental mouse.

Bioprinting technology places strict requirements on the equipment. First, you need very small nozzles — much thinner than a human hair. Secondly, high precision is needed to lay out the cells exactly where they are needed. Thirdly, special bio-inks are used, which then function like normal tissue. It is also necessary to create microchannels that will feed some of the cells — a kind of blood substitute.

In 2019, the world's first human heart was printed in Israel. Scientists have grown heart muscle cells from stem cells, which, in turn, “reprogrammed” from fat. The process took three hours. “The heart we received is completely biocompatible and suitable for the patient. This is a full-fledged working body, », — said lead author of the study, Professor Tal Dvir.

True, a patient for such an organ would have to be found somewhere in Lilliput — it was only 2.5 centimeters in size. Nevertheless, the authors of the experiment expressed the hope that in 10 years it will be possible to print a heart that is completely ready for transplantation to a person. & nbsp;

A few years ago, at the Institute of Regenerative Medicine in Wake Forest (USA), they made a device that prints two layers of a patient's own skin directly onto his wound. But even here there are reservations: experimental animals are still acting as the patient.

It looks like this. Inside the bioprinter (and it is quite large, the size of a room) they put a pig that has a wound on the skin. The built-in scanner studies the defect, the program calculates how many layers of skin need to be applied to eliminate it, builds a structure for wound healing, after which collagen (connective tissue cells) and the pig's own cells, or rather — the outer layer of her skin. This is how rejection is avoided. The printer can close a small defect in less than an hour.

When the device is ready for use in humans (and it shows remarkable results in pigs), it can be placed directly in hospitals. It will come to the aid of patients with burns, diabetic ulcers and other skin lesions that cannot heal on their own. And, of course, it will come in handy in hospitals where soldiers and officers who have received wounds or burns come from the combat zone.

Chinese researchers are confident that it will be possible to treat stomach ulcers and other damage to internal organs in this way. Such pathologies, they argue, have one in eight people in the world, and conventional methods of treatment have certain disadvantages. The printer robot, which produces living cells to form tissues and organs, can be launched first of all into the gastrointestinal tract, where it will “patch” the the same ulcer.

And in the more distant future, when the technology is finalized, it will come to the aid of people waiting in line for organ transplants. These queues will simply disappear, and donors will no longer be needed. After all, a microprinter launched inside the body will print the organ we need from our own cells.

Probably, many of us would very much like their liver to live up to this time.